Part 9 of Losing Louisiana, a series originally published in onEarth. 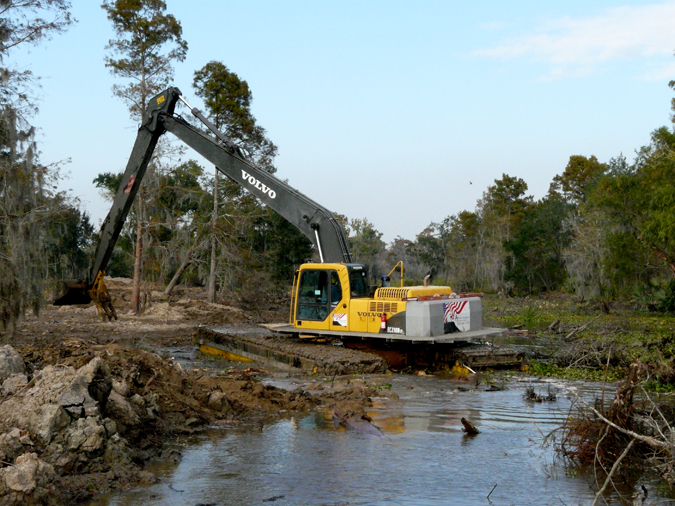 It may not look pretty now, but this process will turn a manmade mess in Louisiana’s Barataria Preserve back into more natural marsh land. Photos by Barry Yeoman.

KERRY STAFFORD CAN’T RESIST THE OPPORTUNITY to catch a baby alligator with his bare hands. He maneuvers his airboat this way and that, reaching over the side, explaining that a picture of me holding the skinny creature would be a fine souvenir of our trip into Louisiana’s Barataria Preserve 20 miles south of New Orleans. The reptile proves too fast for Stafford, though. It disappears into the trees that line the banks of this canal. That’s fine by me: by the end of the afternoon, we will have seen 14 alligators, most of them moving slowly enough to allow me to photograph them in their natural environment.

Besides, there’s a more impressive — and more rare — sight up ahead. Stafford and ecologist Kevin Heatley are about to show me one of the few universally popular restoration projects taking place on the Louisiana coast.

The Pelican State is losing some of its richest ecosystems: its marshes, swamps, ridges, and barrier islands, which nurture the Gulf Coast’s marine and bird life and protect its human communities from hurricanes. There are many reasons for this disappearance, from the leveeing of the Mississippi River to sea-level rise caused by global warming. The U.S. Environmental Protection Agency warns that coastal Louisiana could lose one-third of its land by 2050 — a mind-quivering prediction for a nation dependent on the state’s oil, natural gas, and seafood.

There are numerous proposals for restoring the wetlands, (discussed elsewhere in this series). But all the proposed solutions require significant trade-offs, from expensive price tags to the flooding of human communities. As a result, while scientists agree the system is in collapse, they disagree vehemently over which proposals will restore the coast most efficiently and with the least collateral damage.

But in the case of the project I’m about to witness — which uses heavy machinery to refill environmentally destructive manmade canals — the only objector is a tree that shouldn’t be here in the first place. 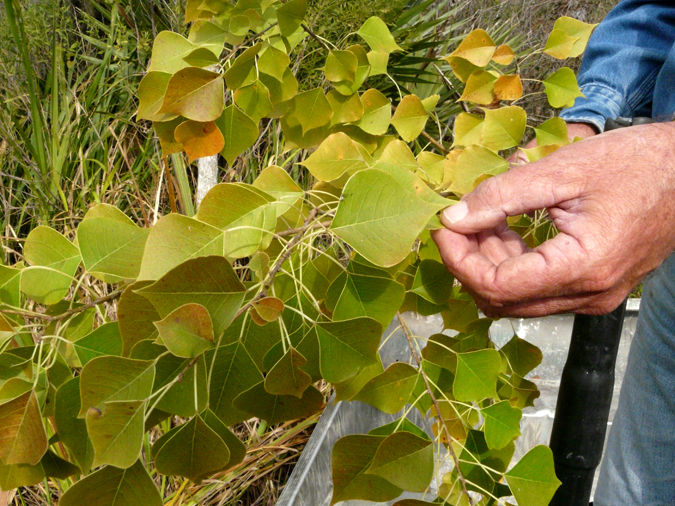 Chinese tallow trees were imported to Louisiana for landscaping purposes largely because of their pretty leaves. They invaded the region quickly, displacing native vegetation.

Stafford, who runs a civil construction company in Louisiana’s Plaquemines Parish, and Heatley, a senior scientist at the Baltimore-based ecological restoration firm Biohabitats, are working in Barataria Preserve, part of the National Park Service’s Jean Lafitte Historic Park. It consists of 25,000 acres of marshes, swamps, and forests that provide shelter to 300 species of birds, including indigo buntings, scarlet tanagers, yellow-crowned night herons, and bald eagles. It also contains a portion of the world’s largest floating marsh: a thick mat of intertwined plant roots — arrowhead, pennywort, cattail, alligator weed — suspended above the water table.

But not all of the preserve’s flora is equally welcome. The tree that dominates these banks is an invasive species called Chinese tallow. “Biological pollution,” Heatley calls them. He gets no small pleasure from watching Stafford’s heavy equipment mow the trees down.

Here’s why: From the 1950s through the ’80s, oil and gas companies dug extensive canals here, both to navigate through the wetlands and as corridors for pipelines and exploratory wells. Other canals were dredged to obtain soil for dike construction, in some cases by developers hoping to build houses. The canals interfered with the natural water-flow patterns and helped funnel saltwater from the Gulf of Mexico into fresh marshes, where it killed plants and aggravated erosion. What’s more, the dirt from dredging was thrown onto the sides of the canals, creating elevated areas called “spoil mounds.” Some grew as high as eight feet tall.

In effect, the oil companies created artificial upland systems where the marshes were supposed to be flat and low. Changes in elevation, like other land disturbances, encourage the propagation of invasive plants. As a result, Chinese tallow — a scrubby tree with diamond-shaped leaves that turn brilliant colors in the fall — has taken over the banks and displaced native species. “You’re looking at a massive transformation of the forest system,” Heatley says. 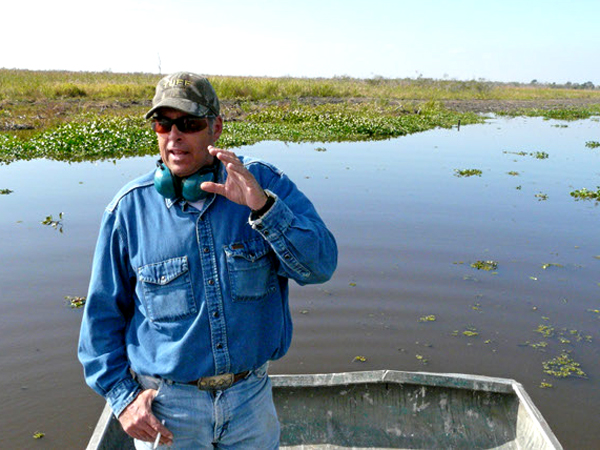 “Some yahoo decided that it grew fast,” Kerry Stafford says of the tallow tree. He’s happy to see them go.

The restoration project is designed to attack both problems — the manmade canals and the Chinese tallow — at once. It uses Stafford’s “marsh buggies,” which are specialized excavators built on pontoons and designed to operate in shallow water. The excavators bulldoze the tallow trees and dump them into the bottom of the canals. They then fill the canals with dirt from the spoil mounds, helping to restore the historic flow of fresh water.

Bringing the marshland to its historic elevation allows native plants to regain a competitive advantage. Biohabitats generally doesn’t replant the indigenous vegetation (except for a handful of cypresses); that part is done by nature.

Our boat passes one of Stafford’s excavators. A few yards later, the vista changes dramatically. Instead of shooting down a canal lined by tallow forest, we are suddenly in a marsh that more closely resembles what this place looked like before the oil companies arrived. Native grasses and sedges surround us, and we can see for miles. There are also oaks and bald cypresses: The marsh buggies gingerly avoided the best specimens of these native trees, tracing small circular plots on the spoil mounds that stayed intact as everything else got leveled. 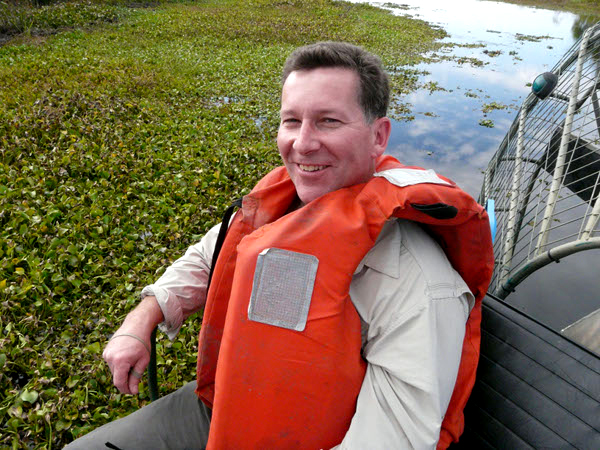 Kevin Heatley says there are no technical barriers to using these reclamation techniques on the entire area. “It’s just political will.”

“All this was bare mud just in July,” Heatley says. Removing the spoil mounds can transform the landscape within months, providing “instant gratification,” he says. It’s a permanent fix, he adds, because the higher soils where the tallow thrived no longer exist. “You’re creating a habitat where they won’t survive.”

WE CONTINUE ALONG THE BACKFILLED CHANNEL. The two men keep me entertained with their easy rapport. On the surface, they appear as different as can be. Heatley, a vegetarian and self-described “eco-radical,” lives in rural Pennsylvania and spends his off hours fighting natural-gas drilling in the Marcellus Shale region. Stafford, a self-described “redneck” with a deep voice and a Texas accent, loves hunting and football and goads the ecologist with wisecracks about Yankees and President Obama. They get along splendidly — united, it seems, by their sense of mission when it comes to restoring Louisiana’s wetlands and their hatred of invasive trees.

“How did the Chinese tallow find its way here in the first place?” I ask.

“Some yahoo” — Stafford pronounces it yay-hoo — “decided that it grew fast. They planted it in their back yard and those things put out these little berries.” Water carries those berries far and wide, he says, and “wherever they land, they grow.”

“That question’s a land mine,” Heatley interrupts, animated and angry. “In the United States — and you can quote me on this, I don’t care — we privatize profits and we socialize costs. In the interests of private enterprise, we allow people to import all kinds of stuff, and then we find out decades later, oh my gosh, look what it does.”

Invasive species are often overlooked as a cause of coastal degradation, Heatley adds. When trees like Chinese tallow take over, they don’t just displace native species. “It’s more along the lines of a spider web. You pick at one thread and all of a sudden it moves in a totally different position. It might be that a non-native plant comes in, and its nutritive value is different from the native species that it displaces. Whatever fed on that native species is not getting the same level of nutrition. Now the animals’ reproductive success is negatively affected. Before you know it, a couple of decades go by and we go, ‘Hey, how come there’s not so much of this anymore?'” 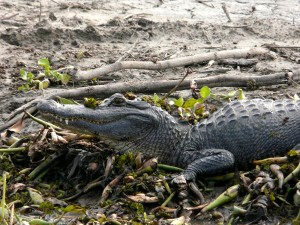 Invasive plant species like the tallow tree can have far-reaching effects on an entire ecosystem, including alligators like this one.

Nobody, not even Heatley, argues that uprooting trees and backfilling canals will save the coast. But during my month in Louisiana, this was the only project that had the support of everyone I interviewed. “It’s one more example of how this system can heal itself,” Aaron Viles, campaign director for the New Orleans-based Gulf Restoration Network, told me before my visit to Barataria Preserve. “If we can put the pieces back together for it to knit itself whole — like a broken bone, really — we can heal this landscape. Backfilling those canals is not nearly as sexy as ‘let’s put a big diversion here’ or ‘let’s get a big pipeline to dedicate the dredge material.’ But you stop the bleeding, and that’s a critical piece of this.”

Since May, Biohabitats and Stafford’s construction firm have filled five miles of canal, financed partly by federal stimulus money. That’s miniscule compared to the 10,000 miles of oil-industry canals in coastal Louisiana. “Obviously, they’re not going to be able to do the entire preserve unless a bucket of money falls from the sky,” Heatley says. But they’ve demonstrated that the method can be ramped up to a much larger scale if the money is there. “There are no technical barriers,” he says. “It’s just political will.”

The setting of Barataria Preserve makes the early results particularly gratifying. “This environment here, the cascading effects of what we do, will be realized for generations. Thirty years from now, I can come back and say, ‘I did this. You should have seen the shit mess it was before I fixed it.'” 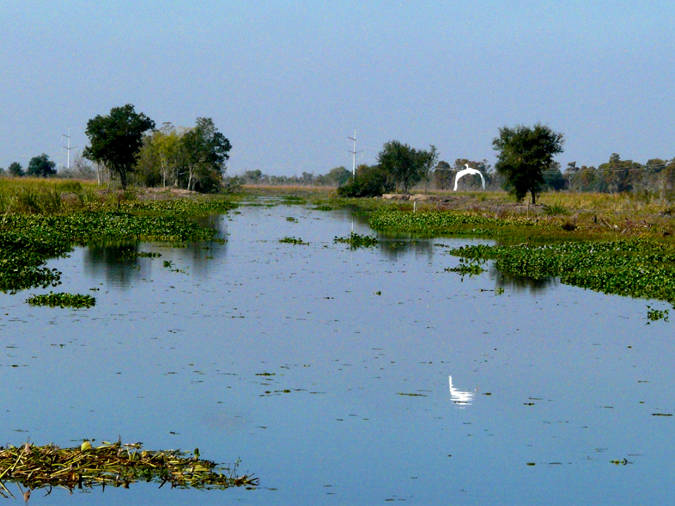 Several months after the tallows have been removed and the canals filled in, the land is reverting back to more natural marsh.