There are solutions for the disappearing Louisiana coastline, but they all come with costs and controversies. Can we act before it’s too late?

Part 10 of Losing Louisiana, a series originally published in onEarth. 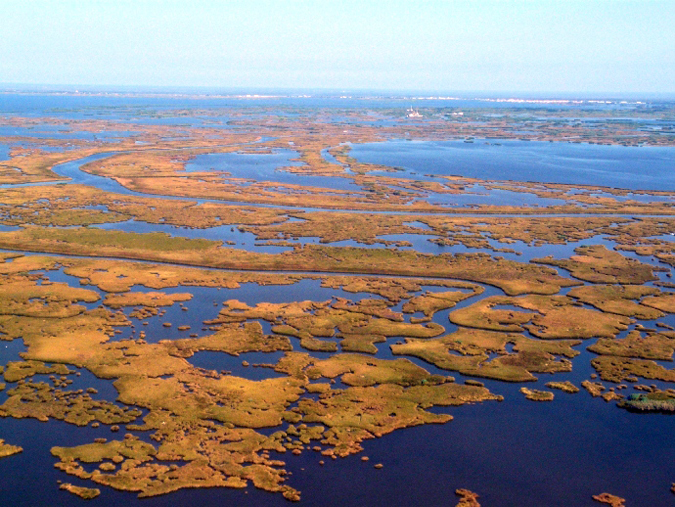 Louisiana loses a football field’s worth of land every 45 to 60 minutes. Photo by Barry Yeoman.

DURING MY TIME IN LOUISIANA reporting this series, I witnessed every variety of frustration and despair. I spent time with scientists, shrimpers, oystermen, oilfield workers, environmental activists, tribal leaders, and state regulators. Many are losing their livelihoods, losing their homes, losing their hope for the future. It’s not hard when the land under their feet is disappearing, along with the marine life that feeds them and provides income for their families and purpose for their communities. Given the state’s environmental calamities, both short- and long-term, I often found myself sharing those feelings.

The region is still recovering from the BP oil spill, whose full effects will not be known for decades. It has never recovered from the spate of hurricanes that began in 2005. On top of that, there’s a larger, more persistent problem: The Louisiana coast — with its fresh- and saltwater marshes, cypress-tupelo swamps, bayous, and barrier islands — is losing land at the rate of 25 square miles a year. That’s more than a football field every hour disappearing beneath the water.

Fertile fisheries are at risk. The nation’s oil-and-gas infrastructure is vulnerable. Entire communities could get swallowed by the Gulf of Mexico. And the hurricane protection that these wetlands provide, already severely compromised (as we witnessed during Katrina), will diminish further. The loss of storm protection alone could cost coastal communities from Alabama to Texas $700 billion by 2030, according to an October 2010 study.

All of this means the literal disappearance of the Louisiana coast, and particularly the Mississippi River delta, is not a regional problem. It’s a national calamity.

It’s easy to get frustrated, too, because scientists and policy makers don’t agree among themselves about the solutions. They need to start resolving their disagreements — soon. Kerry St. Pé, program director of the Barataria-Terrebonne National Estuary Program, says we have no more than ten years to start reversing Louisiana’s land loss. After that, massive relocation of the region’s population will become necessary, and restoration will no longer be economically viable.

For one, we need to start seriously tackling climate change, and that’s obviously not just a local or state or even national problem. Global warming has driven up sea levels, and that in turn swallows land.

“For the Gulf Coast, sea-level rise in the last century has been about five times more rapid than it was in the previous 1,000 years, before the Industrial Revolution,” says Torbjörn Törnqvist, a professor of earth and environmental sciences at Tulane University. That rise is “certain to accelerate” over the next century. “Ultimately, what’s going to happen to this region is going to depend primarily on what happens globally regarding climate change. The people of coastal Louisiana, who have a high level of awareness of wetlands loss, need to make sure that it’s widely recognized that we are, within the United States, perhaps the first casualty of climate change.”

Of course, we can’t sit and wait for the world to solve the climate crisis. We also have to address the disappearing coastline more directly. That effort must come primarily from the federal government. What’s needed is too big (and too important) for state government to handle by itself.

The major culprit in Louisiana’s land loss is the Mississippi River levee system. Before the river was walled off — a process that gained momentum after the Great Flood of 1927 — its fresh water would overtop the banks during seasonal floods. That water carried sediment, which in turn nourished Louisiana’s wetlands. “In the natural state, that served to offset the fact that the delta is sinking and sea level is rising,” says Törnqvist.

These days, the Mississippi carries less suspended sediment than it did in the 1800s. Most of what remains shoots all the way down the river into the Gulf of Mexico and over the continental shelf. Any restoration plan will entail getting more sediment into the coastal wetlands where they belong.

There are two basic proposals for how to do this: either we pipe the sediment directly to where it’s needed, or we try to mimic the river’s natural way of building land.

St. Pé, whose estuary program was created under the federal Clean Water Act, has championed a proposal to dredge sediment from the Mississippi and other nearby sources and carry it by pipeline to the areas that need it most. The dredge has been described as a “giant floating vacuum cleaner” that cuts up the bottom of the river and sucks in sediment and water to form a slurry. The mixture travels to degraded wetlands, where it is fanned across a restoration area to rebuild marshes, ridges, and barrier islands. The resulting land mass creates platforms for vegetation and habitat for animal life.

“Over the last 15 years, we’ve been doing research on the response of wetlands to receiving sediment that way,” says Irv Mendelssohn, a professor of oceanography and coastal science at Louisiana State University. “The results are impressive. When the right sediment is used, very rapidly does one see a return of the ecological structure and many of the functions of the wetland, from fisheries support to impeding storm surges.”

The pipeline proposal has pitfalls, though. For one, it would consume a lot of fossil fuel energy on an ongoing basis. And some scientists believe the only way to build ecologically robust land — marshes that behave like marshes — is to let the river itself do the work. “Many of the things we value about the coastal wetlands are about their natural characteristics,” says Denise Reed, a professor of earth and environmental sciences at the University of New Orleans. “If we deny the use of nature, then we’re really cutting ourselves off at the knees.”

To create new land, Reed would realign the river so it can start building deltas in shallow water rather than dumping its sediment into the Gulf. Overwhelming as this seems, she considers it a viable undertaking that must be done in consultation with the navigation industry. To nourish existing marshes, Reed supports “diversions”: engineered systems that essentially replace sections of levee with gates that allow fresh water and sediment to flood the wetlands during certain parts of the year.

One advantage of diversions, says Tulane’s Törnqvist, is that they require considerably less fuel than sediment pipelines. “Except for the construction and the maintenance of a gate, it doesn’t cost any energy,” he says. “All the work is done by nature itself.” And the land-building is done relatively efficiently, he says: a 2009 paper published by the American Geophysical Union projected that diversions could build anywhere from 270 to 1,058 square miles of land over the next century.

There is, however, a downside to large diversions: By exposing more land to flooding, they’re likely to uproot human communities. They will also freshen waters that have adapted to salt, devastating parts of the oyster-harvesting industry. Supporters call this inevitable.

“At some point, you’re going to have to break some eggs,” says Len Bahr, a wetlands ecologist. “By trying to protect unprotectable property, you’re going to sacrifice the rest of the ecosystem.” Critics, on the other hand, call it unacceptable. “Our definition of ‘ecology’ includes the people who live here,” says St. Pé.

When I met Bahr, who served as a coastal-policy advisor to five Louisiana governors, he gave voice to one of my fears about efforts to fix Louisiana’s coast. “Given the complexity of the issues, and given the politics, there is no way that a consensus will come about,” he said. “It’s almost like you need a benevolent czar who knows the science and can ramrod the right thing through and piss off a lot of people in the process.”

But we live in a democracy. That begs the question: is there reason to believe the coast can be saved? Or will St. Pé’s biggest fear — that “we’re all going to argue until we drown” — come to fruition?

Surprisingly, everyone I interviewed held onto some kernel of hope, some nugget that allows them to carry on.

For Bahr, it was “a perhaps naive optimism” in the power of information technology. Scientists are growing more able to use tools like geographic information systems to compare the benefits and downsides of different approaches. Bahr hopes federal policymakers might use these new technologies to do the right thing.

For Denise Reed, hope resides in the fines that BP will pay as a result of the Deepwater Horizon blowout, much of which should be dedicated to coastal restoration. The size of BP’s penalty is still an open question; it could be upwards of $20 billion or much less. In September, Navy Secretary Ray Mabus issued a report calling on Congress to dedicate a “significant amount” of BP’s civil fines to region’s recovery. (The figure 80 percent is often mentioned.)

“It is in the Gulf where much of the nation’s oil and seafood are produced, it is in the Gulf where the damage from the spill occurred, and it is to the Gulf where recovery funds must be dedicated,” the report says. If that happens, says Reed, “we might at last have a chance to think — and act — big, independent of the federal deficit calculation.” But we need to ensure the money will truly be used for restoration — not, for example, simply to build more levees.

My own source of optimism stems from the fact that so many great minds are focused on the Louisiana coast. While they don’t agree on the solutions, they do agree on both the problem and the urgency of solving it. If we can capitalize on that brainpower — and on the sense of immediacy, the availability of funds, and improvements in technology — we at least have a shot at tangibly addressing this national emergency.

But action must begin now. “We have very little time to lose,” Törnqvist says. “Every year we wait, we are at a bigger disadvantage. And there will be a point where we won’t be able to do anything meaningful anymore. I don’t think we’re there yet. But I think we’re a lot closer than people realize.”