The Democratic National Convention kicks off with some old-time religion. 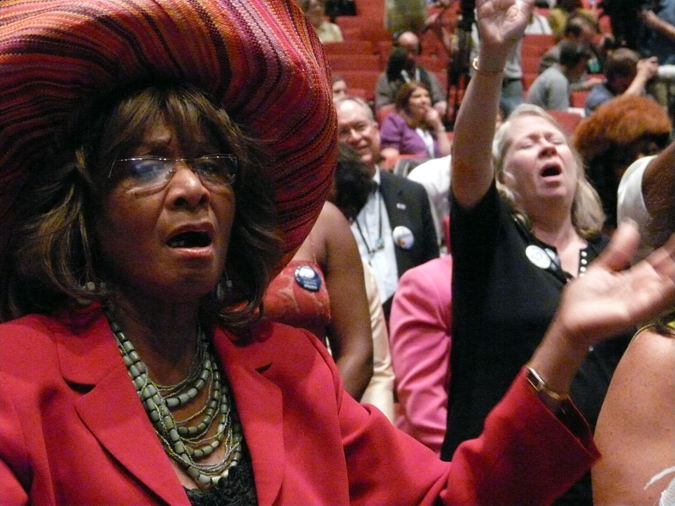 A Sunday afternoon interfaith service kicked off the 2008 DNC. Photo by Barry Yeoman.

THE FIRST WORDS I HEARD WHEN I heard when I walked into the theater at the Colorado Convention Center came from the University of Denver’s Spirituals Project Choir. Two thousand people had gathered for the first official event of the Democratic National Convention and were greeted with an uptempo promise of Christian salvation: “I’m gonna shout ’til the spirit moves in my heart / I’m gonna shout ’til Jesus comes.”

The Sunday afternoon interfaith service was the first of its kind at a Democratic convention. For two hours, delegates and their friends listened to a procession of Christian, Jewish, Muslim and Buddhist leaders who preached, sang and read from their holy books. “Politics, at the deepest place, is about us as spiritual beings understanding there is a God; this is a created world,” said Colorado Gov. Bill Ritter, who welcomed the guests. “We need to remind the rest of the country that there is absolutely, in our party, a tremendous intersection of faith and politics.”

Sharing the podium with Ritter was convention CEO Leah Daughtry, herself a Pentecostal minister from Washington, D.C. “With all due respect to the commentators and my friends in the media,” Daughtry proclaimed, “we didn’t need to bring faith to the party. Faith is already here.” Cheers and amens filled the hall.

For those who believe in the separation of church and state, this might seem like a jarring way to kick off the Democrats’ quadrennial assembly. But party leaders have been deliberately trying to snag the religious high ground from the GOP. They believe the time is right: A growing number of white evangelicals are seeing their spiritual calling through wider lenses than the Jerry Falwells of the world once envisioned. The National Association of Evangelicals has lobbied in Washington for debt relief for developing nations and greater attention to climate change. Younger Christians, in particular, make it clear that they don’t share their elders’ priorities. During the primary season, the 20-something Christian magazine Relevant polled its readers about their political views. While a majority considered themselves conservative on social issues like abortion and gay rights, only 14 percent said they were conservative on health care and poverty. When asked who Jesus would vote for, they chose Obama over McCain 4-to-1.

Last week, the Pew Research Center released a survey that showed the Democratic Party is making gains in its spiritual cred. Among those surveyed, 38 percent called the party faith-friendly, up from 26 percent four years ago. That’s still less than the 43 percent who believe that irreligious liberals have too much control over the Democratic agenda. Party leaders want to change this perception: Not only did the convention open with a worship service, but for the first time there will be a “faith caucus” that will gather twice this week.

This new emphasis is designed to appeal to evangelicals like Kristine Fallstone, a member of the Electoral College from Dupont, Wash., whom I met at the Convention Center Sunday. A half-hearted Lutheran for most of her life, she was catapulted deeper into faith when her son Alexander, a soldier with the Army’s Stryker Brigade, was killed during a stateside training accident in 2005. Afterward, Fallstone said, “I ran to God.” She joined an Evangelical Covenant Church with a multiracial membership, and become more active in the Democratic Party, helping to recruit anti-war candidates.

Fallstone was most attracted to Sunday’s best-known speaker, Sister Helen Prejean, the Louisiana nun whose crusade against capital punishment was made famous in the film Dead Man Walking. Linking her own cause to the war in Iraq, Prejean told the Democrats, “The practice of the death penalty on our own soil has made it easier for us to kill those we designate as enemies.” It was a not-so-subtle rebuke to presidential nominee Barack Obama, who has said he supports the death penalty.

But not everyone viewed Prejean as the gathering’s top star. I sat amid several well-dressed members of the Church of God in Christ, (COGIC), a large Pentecostal denomination, who saved their loudest applause for one of their own. COGIC Presiding Bishop Charles Blake, whose own Los Angeles church has 24,000 members, delivered a sermon that was as fiery as it was contrarian: The self-proclaimed “pro-life Democrat” excoriated his party for its “disregard of the lives of the unborn.”

“Surely we cannot be pleased with the routine administration of millions of surgically terminated pregnancies,” Blake said. “If we do not we resist at this point, at what point will we resist?” (“Preach it!” some Democrats responded.) But the bishop stopped short at allying himself with pro-life Republicans who remain “silent, if not indifferent” to poverty and inequality. “Others proclaim their advocacy for the unborn,” he said. “But they refuse to recognize their responsibility, and the responsibility of our nation, to those who have been born.”