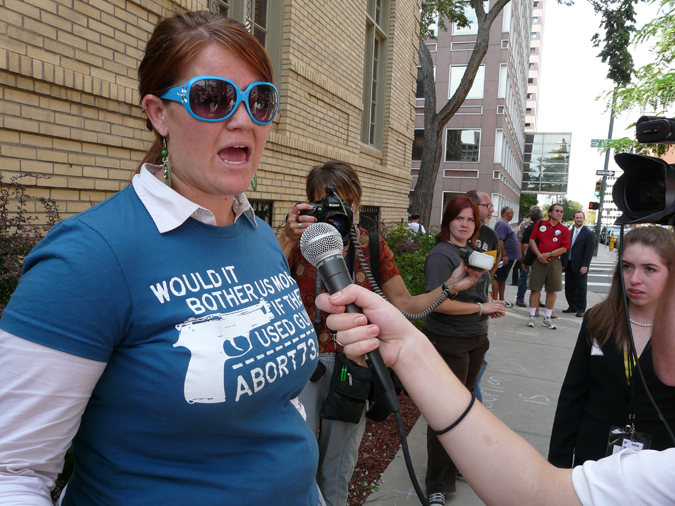 “Most of you guys are probably against the war,” shouted Kortney Blythe. “What about the war on the unborn children?” Photos by Barry Yeoman.

DURING THIS WEEK OF THE DEMOCRATIC National Convention, it’s hard to walk more than a few blocks in downtown Denver without encountering clusters of abortion opponents carrying billboard-sized photos of fetal remains. They often make a lot of noise—but the demonstrators outside the University Club on Monday afternoon were particularly aggressive. They had timed their protest to coincide with the “Women’s EqualiTea,” a reception sponsored by the National Organization for Women and four other feminist groups to honor the progress made in the 88 years since the 19th Amendment granted voting rights to female citizens. The event would be a particularly ripe opportunity for the pro-lifers to confront their Democratic adversaries.

As 3 o’clock drew near, a stream of taxis pulled up to the curb outside the neoclassical landmark a few blocks from the state Capitol. Democratic women stepped out of their cabs and onto a sidewalk chalked with dozens of anti-abortion slogans. There, they encountered a 25-year-old North Carolinian wearing oversized blue plastic sunglasses that matched the color of her T-shirt and bullhorn.

“Most of you guys are probably against the war,” shouted Kortney Blythe, who grew up in Charlotte. “What about the war on the unborn children? What about the war that kills over 3,000 children every day in our country alone? One-third of those of us who were conceived after Roe v. Wade were violently killed in the name of choice.” 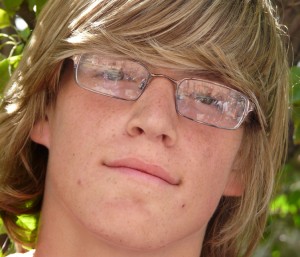 Ian Giacopuzzi, 17, attended the summer camp where he learned how to stand outside schools with duct tape over his mouth “to represent the babies that will never have a voice.”

Blythe was raised in an extended family of anti-abortion activists. After graduating from Montreat College outside Asheville, N.C., she returned to her hometown to work for Room at the Inn, a pro-life Catholic maternity home. She’s now an organizer with Survivors, a Christian group that mobilizes teenagers and young adults for confrontational street protests. (The name refers to the fact that any member born after the 1973 Roe decision could have been legally aborted.)

Each year, Blythe leads a 100-campus outreach tour of high schools and colleges nationwide. High schools, she says, are her favorite stops. “High schoolers aren’t even so stuck in their ways,” she says. “They have open minds”—unlike, she insists, the women attending the EqualiTea. “Also, I’m getting older. I mean, I’m 25, so I’m not old-old. But that 14-year-old is going to be able to come up and be the next generation of pro-life leadership.”

During the summers, Blythe helps run Survivors’ nine-day training camp in Rosemead, Calif., which she calls a “pro-life boot camp.” Budding activists, starting at age 14, are taken to beaches, commercial neighborhoods and abortion clinics for in-your-face encounters that often involve the same graphic photos on display in Denver. 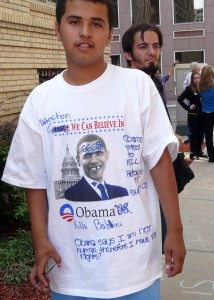 Campers also receive a crash course on what the movement calls “pro-life apologetics.” “They train you in how to argue with anyone and prove them wrong,” says Ian Giacopuzzi, a shaggy-haired 17-year-old who participated in Monday’s demonstration. Giacopuzzi, who says his father was active in Operation Rescue, first attended the summer camp three years ago. There, he learned how to stand outside schools with duct tape over his mouth “to represent the babies that will never have a voice.”

Many of Monday’s protesters were former campers like Giacopuzzi, who had come to the University Club without their parents. The youngest I met was 14-year-old Michael Garcia, who wore a T-shirt depicting Barack Obama as the devil. The protesters’ youthfulness, in particular, outraged Joan Lipkin, a theater director and pro-choice activist who is visiting Denver from St. Louis this week. “What these people are doing is street theater,” Lipkin told me. “But they’re also engaging in child abuse. There are minors here who are being brainwashed and manipulated in ways that are most disturbing.”

From an activism standpoint, though, using children can be very effective, if unsettling. Kids haven’t developed adult filters yet, so it’s easier to train them to goad passersby relentlessly. And goad they did. One older feminist tried to engage the protesters, telling them she had gone through a miscarriage herself and found the blown-up photos of fetuses disturbing. “So you want to kill more babies in return?” a male protester shouted back.

Blythe insists that provoking passersby is a critical strategy for the anti-abortion movement to succeed. She uses the example of the gory photographs. “If we look at history, and what things caused such a change and such a stir in our society, pictures had a huge part in it,” she says. “When you think about the picture from the Vietnam war of the kid running away from the bomb—before that, wars were just conceptual. There was no real visualization. When people finally saw what war did, more people were anti-war.”

Blythe plans to spend the rest of the week bringing images of aborted fetuses to the sidewalks of Denver. Then she’ll return to her new California home, just in time to kick off this fall’s campus tour. 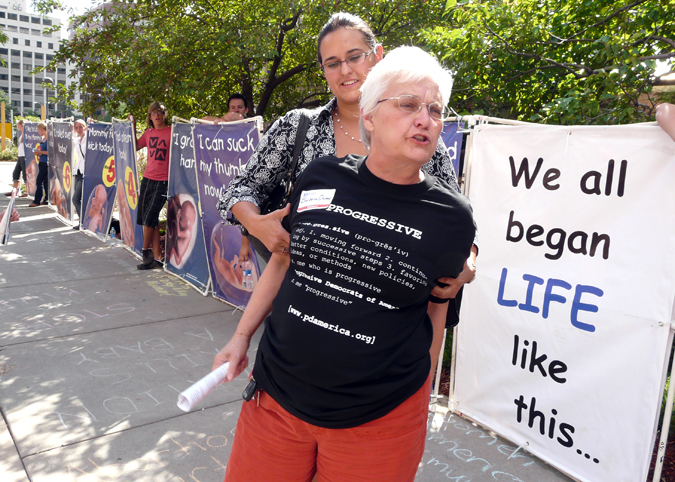 An abortion-rights supporter is encouraged by a friend not to overreact to protesters.