On the first day, God created pit bulls. On the second day, He created lipstick. 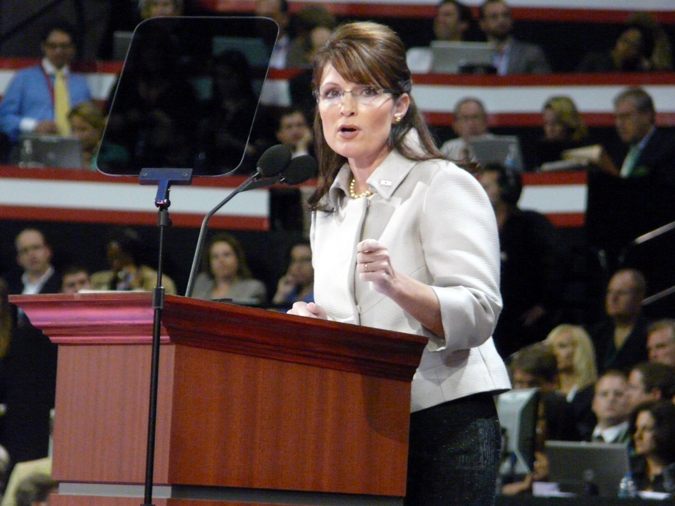 AS THE OWNER OF A FRIENDLY PIT-BULL MIX, I wasn’t quite sure what to make of Alaska Gov. Sarah Palin’s off-script line last night at the Republican National Convention: “Do you know the difference between a hockey mom and a pit bull? Lipstick!” Did the vice presidential nominee mean that hockey mothers are smart and loyal but bred for the wrong reasons?

I admit: She delivered the line well. She delivered many of her lines—described by Slate magazine as a “succession of happy little kicks in the groin”—in a fashion that was simultaneously homespun and forceful. Her criticism of Sen. Barack Obama was the type of “red meat” (a favorite Republican phrase) that delegates here in St. Paul, Minn., have been craving. When she said, “I guess a small-town mayor is sort of like a ‘community organizer,’ except that you have actual responsibilities,” the crowd broke into a frenzy. Her attack on the news media was the most cathartic moment of the convention so far: The entire arena turned to the press section and booed.

“My voice was almost completely hoarse from yelling, and my hands hurt from clapping, and you could see the tears in people’s eyes,” said Justin Burr of Albemarle, N.C., who is running for the state House, after the speech. “I’m energized. I’m ready to go home now and put up 10,000 signs.”

Besides her compelling “hockey mom” narrative, Palin energizes the Republican base with her conservative issue stands. She favors oil drilling both off the Alaska coast and in the Arctic National Wildlife Refuge. She sued the federal government to remove the polar bear from the endangered species list. She opposes all non-lifesaving abortions, even for women who have been raped. She’s against the type of sex education that might have kept her 17-year-old daughter unpregnant. She doesn’t believe global warming is a manmade problem.

Oh, and she appears to be a creationist.

Palin never explicitly says this. But she supports the teaching of creationism alongside evolution in the public schools. (She has not pushed to mandate it in Alaska.) “Teach both,” she said in a 2006 gubernatorial debate. “You know, don’t be afraid of information. Healthy debate is so important, and it’s so valuable in our schools.” Asked her own personal view, she said, “I believe we have a creator,” but wouldn’t elaborate.

Palin’s running mate, Sen. John McCain, has said he believes in evolution, although he also sees “the hand of God” in places like the Grand Canyon. 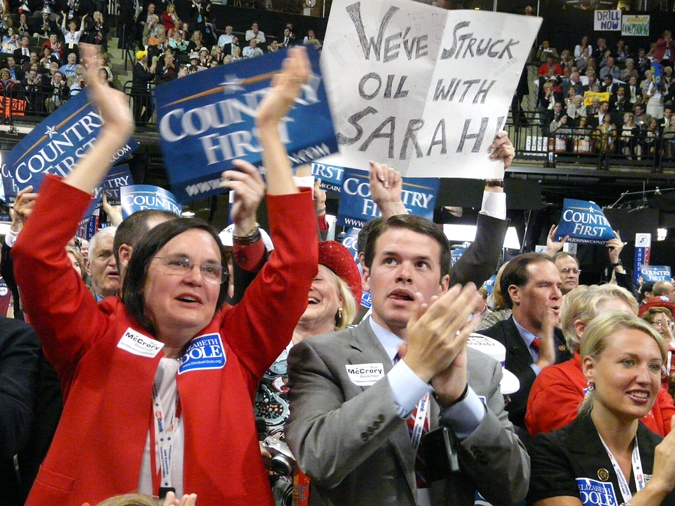 Justin Burr: “If someone wants to believe they’re the descendents of monkeys, that’s fine.” He is now a state legislator.

Palin has plenty of company. Last year, a USA Today/Gallup poll showed that 66 percent of Americans believed that God definitely or probably created human beings in their present form within the past 10,000 years. (In the same survey, 53 percent said they definitely or probably believed in evolution. Go figure.) Creationism is not just a belief system of the uneducated: Of the eight North Carolina delegates I interviewed about the issue yesterday, six were unequivocal creationists while two professed something closer to intelligent design.

“I believe that in the beginning, God created the heavens and the earth,” said Kieran Shanahan, a former Raleigh city council member, quoting the book of Genesis. “And you can’t get past ‘In the beginning.'”

“If someone wants to believe they’re the descendents of monkeys, that’s fine,” said Burr. “But I don’t believe that. I believe that Jesus Christ is the son of God and he created every one of us.” 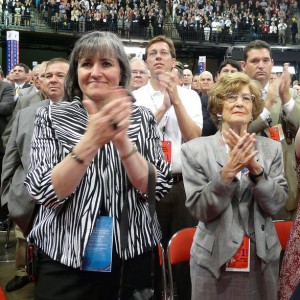 Zan Bunn, a delegate from Cary, wants public schools to stop teaching evolution. “I happen to believe in God,” she says.

Most of the delegates I interviewed supported the teaching of evolution and divine creation side by side, as Palin does. What struck me about their responses was that the teaching of creationism was a given for them. The real question was whether also to include evolution in the curriculum.

“I think it’s a great idea,” said Jonathan Bandy of Raleigh, the North Carolina field coordinator for the anti-tax group Americans for Prosperity. “The definition of ‘faith’ is you have to believe in something, and I believe evolution theory is in itself a religion. You have to believe it happened. So why not have creation theory taught? If we really want to educate people, any theories that are out there they should be privy to.”

But Zan Bunn, a delegate from Cary, wanted to remove evolution from the public schools altogether. “I believe in North Carolina, it should be taught creationism,” she said.

“Because I happen to believe in God.”

Bunn looked at me like this should all be self-evident. “Well, you believe in God and you believe in creation,” she said. “And that’s really very simple.”

Day 3: Young, But Not for Obama