More than two years after his father died in Afghanistan, a North Carolina guest at the GOP convention reflects on the war. 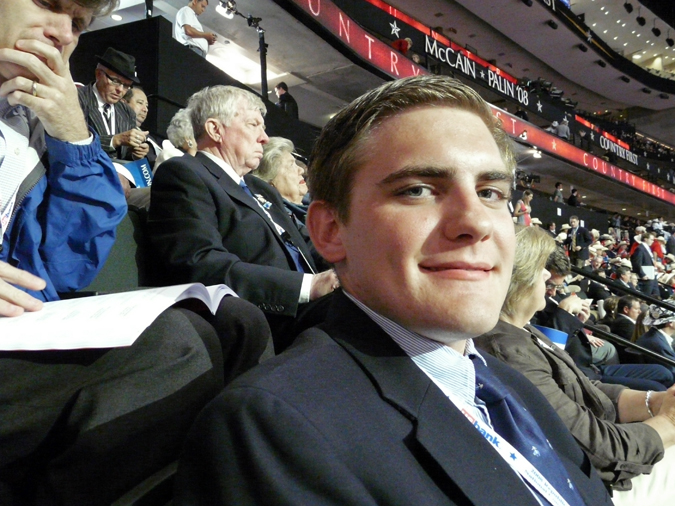 THIS WEEK, AS NICK OCHSNER ATTENDS THE Republican National Convention in St. Paul, Minn., the Elon University sophomore can’t listen to all the pro-military speeches without thinking about his father. Sgt. 1st Class Jim Ochsner, a special forces intelligence specialist stationed at Fort Bragg, died in November 2005 in Afghanistan. He was 36, and it was his fourth tour of duty in the country.

The elder Ochsner was on a mission to distribute supplies to Afghanis in Paktika Province near the Pakistani border. Ochsner normally drove the Humvee, but on that day, his son says, “he threw the keys at someone else and they switched seats.” As the vehicle headed off, a roadside bomb detonated under the left rear tire, delivering a massive head injury to Ochsner, who died instantly. Everyone else in the vehicle survived.

Before his father’s death, Nick Ochsner enthusiastically favored the wars in both Afghanistan and Iraq. Supporting U.S. military missions was an article of faith in his childhood home outside Fayetteville. Losing his father, he says, only deepened that conviction. “A lot of people say, ‘Well, Nick, your father was killed. Surely you’re against the war.’ It’s absolutely the opposite,” he says. “We have men and women who knew what they were doing when they volunteered for the service, and who have now sacrificed for your and [my] freedom. To withdraw without completing the mission would be a disgrace to them and a slap in the face of their families.”

Ochsner has been an active Republican, participating in campaigns from the time he was 13. At the dinner table, his parents talked about politics, and Ochsner took on their conservative views. He supports tax cuts — “I like money,” he says — and opposes efforts to regulate gun ownership. “We owned many, many guns at my house,” he says. “The Second Amendment exists for a reason. If we educate people, if we make them familiar with weapons, we’ll prevent the accidents that people think limiting access to guns would solve.” Ochsner says his father exposed him to real and toy guns and taught him about safety, starting when he was 3 or 4.

At Elon, Ochsner quickly rose within the ranks of the campus’ College Republicans. This year, he takes over the chapter presidency. He says he’s undaunted by the Democratic presidential nominee’s popularity among students. “I think it’s almost an insult to think that college students, just because we’re young, we support Barack Obama,” he says. “We have the actor Kal Penn coming to Elon. He’s been twice now. That’s an example of Barack Obama thinking he can capture the youth vote by flashing movie stars. I think that shows a real misunderstanding of this generation.”

Ochsner came to St. Paul with Jack Sawyer, an alternate delegate from Burlington — the Elon student is running Sawyer’s campaign for N.C. Secretary of State. Although Ochsner’s not a delegate, Sawyer and another friend have been lending him their delegate badges so he attend the convention proceedings. Sunday, he attended a Young Republican party at a local bar. Last night, after the convention session, he was planning to attend a party “that Newt Gingrich may or may not be at.”

He managed, though, to avoid the 10,000 anti-war protesters who took to the streets of St. Paul Monday, passing within a block of the Xcel Energy Center, where the convention is being held. “I saw them on the news,” he says. “One thing my family always talks about is that my father and thousands of other soldiers have given their lives so that people like that can protest and speak their mind.” On the other hand, he says, the demonstrators “clearly obviously aren’t connected with the military community. It’s one thing to be anti-war, but it’s another thing to obviously act without knowing how their actions and how their criticisms are affecting our soldiers. When you act like that, you clearly, clearly are sending a message to our soldiers that you don’t support them.”

In fact, yesterday’s march had a large contingent of veterans, and another contingent of military families. When I mention this to Ochsner, he cuts them a little more slack — but just a little. “That’s a different group of people,” he says. “But those people volunteered to served their country.”