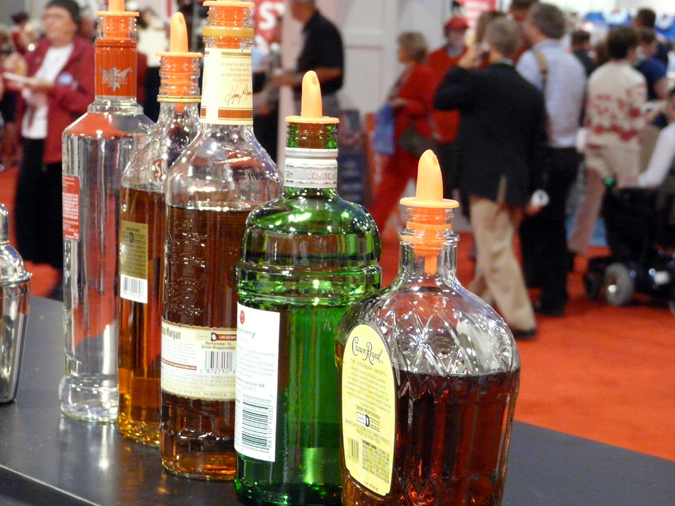 WITH HURRICANE GUSTAV POISED TO HIT the Gulf Coast today, Sen. John McCain has announced that this week’s Republican National Convention would be a scaled-back affair without the usual troop-rousing speeches or over-the-top parties. “This is not a time for politics or celebration,” said McCain’s campaign manager, Rick Davis, yesterday. “It is a time for us to come together as Americans.”

Which doesn’t quite explain the last night’s welcome party at the Minneapolis Convention Center, where delegates from all 50 states wandered among a huge interactive history exhibit. They were photographed stepping off a life-size replica of an Air Force One fuselage. They pretended to get sworn in as president of the United States. Mostly, they ate: tataki salmon; duck spring rolls; platters of antipasto; brie, pear and almond phyllo pastries; homemade walleye cakes with lemon aioli; and carved steamship of beef with wild rice. They washed their meals down with Tanqueray gin, Crown Royal whisky, and Smirnoff vodka (thanks to one of the sponsors, the liquor giant Diageo). Desserts included espresso-chocolate and crème brouleé cheesecake; passionfruit and raspberry mascarpone tartlets; and praline and opera finger cakes. It was all free. 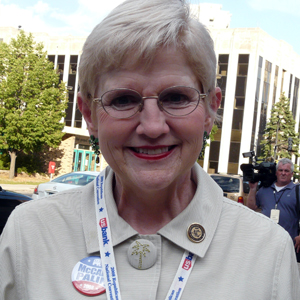 I rode a shuttle bus with the North Carolina delegation. The conversation en route centered around two topics: Sarah Palin and hurricane preparedness. The consensus among delegates: Palin was an inspired choice for vice president (“I was jumping up and down like Snoopy dog,” said Jackie Wieland, an investment adviser from Greensboro); her six years as mayor of Wasilla, Alaska, and 21 months as the state’s governor prepare her to lead the free world; and Trig, her 4-month-old son with Down Syndrome, will do fine on the campaign trail. (To imply otherwise, said state party chair Linda Daves, is “an insult to American women.”)

As for hurricanes: Most of the of the delegates I interviewed cut President Bush slack for his performance after Hurricane Katrina, saying that disaster management isn’t really the federal government’s job.

Here are some of their answers to my questions, edited for brevity:

Is Palin qualified to be commander in chief?

Linda Daves, Charlotte: “Her record of accomplishment, from tackling corruption to cutting taxes, is outstanding. She has got the skills, and the mind, to be a strong commander in chief.”

Jackie Wieland, Greensboro: “She has more executive experience than Obama and Biden put together. She’s run a state that she’s pretty spread out, and she’s a woman in a rough-and-tough state. She doesn’t look to be any sort of cupcake, either. I wouldn’t want to get into a fight with her.”

Louis Pate Jr., retired airman and businessman, Mount Olive: “[She] is not as experienced as one might be to take over the office of the president. With the president’s advisers, it would not be seamless, but I do believe that she would be able to work up to that position very quickly.”

Joe Morgan, retired teacher, Marshall: “As mayor, you are called upon to answer to things that are indicative of good decision-making. I think she has had plenty of experience in decision-making.”

Is Obama qualified to be commander in chief?

Daves: “Absolutely not. Since he’s been in the Senate, he has not had a single initiative that he has initiated, and that he has broken with his party line. Barack Obama has not been an independent thinker.”

Wieland: “He’s a nice guy, great orator, but he really hasn’t done anything. I don’t know what he has managed except for some community activities. In fact, my husband said that he thinks I’m more qualified than Barack Obama.”

Pate: “Going into the presidency as someone who has just served 140 days in Washington, that is a little bit disconcerting to me.”

Morgan: “In the Senate, you don’t determine things yourself. You’re just one of a body of 100 senators.”

How did President Bush handle Katrina?

Daves: “At that time, we hadn’t had any kind of a catastrophe that was that broad and that massive. I don’t know the details, but I think everyone from the local government to the state governments and the federal government—they got caught with their guard down. I’m not going to throw stones at any of the local people. Across the board, the whole thing could have been handled better.”

Wieland (grimacing and laughing nervously): “Well, thou shalt not judge. I think it could have been handled better, but when you’re sitting back, a Monday morning quarterback, it’s hard to judge.”

Pate: “I think they did pretty well. They ran into a lot of red tape. FEMA has been notorious for having a lot of problems, and I don’t think they got a lot of help from the state government of Louisiana nor the municipal government of New Orleans when they were trying to evacuate.”

Morgan: “President Bush tried to give a slap-dash approach to Katrina, but it never did too much good to help the people. He was limited because of his own limitations.”

Day 3: Young, But Not for Obama