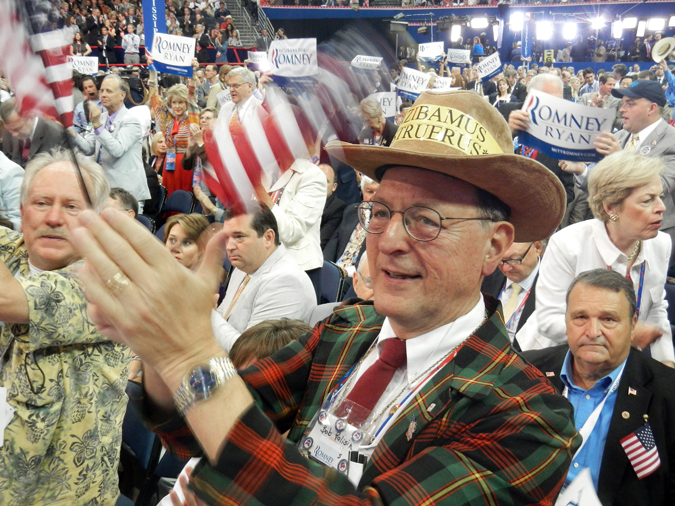 A few years ago, I read about the 2008 closure of a General Motors plant in Janesville, Wis., that threw 4,000 people (including those who worked for suppliers) out of work. The New York Times interviewed one 24-year employee, Andy Richardson, who planned to move away to find a job, leaving his wife and daughters behind in Janesville. “I’ll miss my family,” he said, crying.

Manufacturing jobs were already hemorrhaging at the end of the Bush administration, when the Janesville plant was a poignant symbol. That’s why I took a doubletake when I heard GOP vice presidential candidate Paul Ryan place the blame for the Wisconsin closure on President Obama.

“A lot of guys I went to high school with worked at that GM plant,” Ryan said in his acceptance speech at last night’s session of the Republican National Convention. “Right there at that plant, candidate Obama said, ‘I believe that if our government is there to support you, this plant will be here for another 100 years.’ That’s what he said in 2008. Well, as it turned out, that plant didn’t last another year. It is locked up and empty to this day. And that’s how it is in so many towns where the recovery that was promised is nowhere in sight.”

I watched Ryan’s speech from the seats where North Carolina’s alternate delegates were sitting. They were cheering and waving signs, more energized than I had seen them this week. “Electric,” said Vinnie DeBenedetto, a real-estate broker and former town council member from the Wake County suburb of Holly Springs. “It was just captivating. He hit the heart and soul of the delegates and guests. I think he’s the future of the Republican Party.”

By the time I got back to my hotel, the Internet was buzzing about the speech. The nonpartisan fact-checking site PolitiFact, run by the Tampa Bay Times, had caught the inaccuracy about the Janesville plant—but there was more. I reviewed both PolitiFact and FactCheck.org, a project of the University of Pennsylvania’s Annenberg Public Policy Center. I also read analyses by major news organizations such as the Associated Press and The Washington Post. It turns out Ryan’s speech was studded with errors. Even Fox News called it “an apparent attempt to set the world record for the greatest number of blatant lies and misrepresentations slipped into a political speech.”

• Ryan said that Obama’s health-care reform law “funneled” $716 billion from Medicare services: “The biggest, coldest power play of all in Obamacare came at the expense of the elderly.” In fact, notes the National Journal, none of the cuts come from benefits. What’s more, the Affordable Care Act makes it easier for seniors to afford preventive health services and prescription drugs. FactCheck.org quotes Medicare’s chief actuary as saying the reform law “substantially improves” the system’s finances. Besides, Ryan supported those cuts too.

• Ryan blamed Obama for last year’s downgrade of the United States’ credit rating. In reality, the rating agency Standard & Poor’s faulted both major parties for creating a political environment that was “contentious and fitful.” At the time, congressional Republicans were refusing to raise the country’s debt ceiling unless Democrats slashed social programs and investments. Ryan told CNBC then that he believed “lots of bond traders [and] economists” would accept a default of “a day or two or three or four.”

• Ryan said household incomes increased in Massachusetts when Mitt Romney was governor. In real dollars, they went down, according to PolitiFact.

• The candidate chastised Obama for failing to follow up on the “urgent report” of a bipartisan debt-reduction commission. That’s true. But Ryan neglected to mention that he had sat on that commission and voted against the recommendations. So did all the panel’s Republicans.

• Like many convention speakers, Ryan referred disparagingly to Obama’s “you didn’t build that” comment. “At the corner shops in our towns and cities, the restaurants, cleaners, gyms, hair salons, hardware stores—these didn’t come out of nowhere,” Ryan said. “A lot of heart goes into each one… After all that work, and in a bad economy, it sure doesn’t help to hear from their president that government gets the credit. What they deserve to hear is the truth. Yes, you did build that.”

Obama’s quote has been the bull’s-eye of this convention—the president has been characterized repeatedly as trying to snatch credit from small business people. But PolitiFact, FactCheck.org, and The Washington Post’s The Fact Check all agree: When Obama said “that,” he was referring to infrastructure like roads and bridges that help support businesses. The president was advocating for more taxes on the wealthy to pay for these public investments. “We succeed because of our individual initiative,” Obama said in that July speech in Roanoke, Va., “but also because we do things together.” The biggest problem with Obama’s statement was its mangled grammar.

When I arrived at the North Carolina delegation’s breakfast this morning, there was still considerable buzz around Ryan’s speech. I sat down next to Bob Palisin, a retired Presbyterian minister and former congressional candidate from Concord, near Charlotte. He was wearing his trademark green-and-red plaid jacket and a button with a Republican elephant and a Democratic donkey. “This is your brain,” it said next to the elephant. Alongside the donkey it said, “This is your brain on drugs.” Around his hat was a yellow paper band that said, “Ponzibamus Destruerus,” faux Latin for “Obamacare must be destroyed.”

He was excited about the speech. “It shows a bringing-back into the party, a youthful transition,” he said.

I explained that the sites I had consulted were nonpartisan.

“I’m a history major, so I look into facts myself, rather than what you get from fact-check reports.”

I moved on. Helen Eckman is a former Pentagon employee who retired with her husband to the Eastern North Carolina town of Chocowinity. She had not heard about the factual discrepancies. “I’ll check myself,” she said. “I can’t imagine him getting up there, talking about that plant, and Obama was there and said da-da-da-all-this and then it closed. I just can’t imagine getting up in front of the whole world and saying that, and that wasn’t true. I’ll have to see precisely what he said and how he said it. But it doesn’t worry me. He’s a genius when it comes to finance and money matters, and I just think he’s what this country needs.”

What the country doesn’t need, Eckman said, is four more years of Obama, whose “you didn’t build that” comment both galls and delights her. (Those who believe the president was referring to infrastructure, she said, are “nitpicking.”) “It’s so wonderful,” she said. “Obama really gave us a gift. It’s been fabulous. It’s just so not correct that we didn’t build our own businesses, for heaven’s sakes. Sure, we need all roads and this, that, and the other thing that everyone provided. But, yeah, I just think it’s wonderful how they’ve used it. And I don’t think it’s out of context at all.”

Zan Bunn, the Cary consultant, had not had a chance to read any commentary about the speech. “I will give Paul Ryan the benefit of the doubt on his big night,” she said. “The conversation that America will have about the direction we take in November—there will be plenty of time to clear up any errors.”

“If it turns out that he was making false accusations against the president, would that be of concern for you?” I asked.

“It really wouldn’t be of concern,” she said.

“It really wouldn’t be of concern.”

I raised Obama’s “you didn’t build that” comment. She told me she has “listened and relistened” to that comment, and disagrees with the fact-check groups. “He would have used different grammar if he was referring to the bridges,” she said. “He was clearly insulting business owners. They will not forget that.”

“I’ve gotten the sense, from reading the commentary this morning, that Republicans are more willing to forgive Mr. Ryan on the factual errors than Mr. Obama on his grammar,” I remarked.

“I think that’s accurate,” she said.

“Why do you think that’s true?”

“The president’s had four years and a campaign to get things right, to pass a budget, to create more jobs, to get his factual information correct. He has not performed. So on the night of Paul Ryan’s speech—yes, I think Republicans are likely to be forgiving of him.”