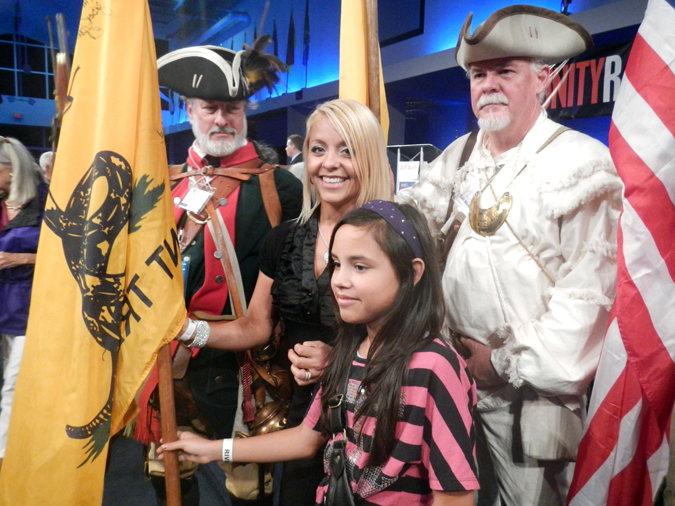 VOLUNTEERS WEARING PLASTIC RAIN PONCHOS steered drivers into the sprawling parking lot of River Ministries International, a campus on the outskirts of Tampa that includes an evangelical church, a worship school, and a “Holy Ghost training center.” There were food trucks and merchandise tables, including one man selling “Anybody but Obama” sticky notes. (He gave me a sample, telling me to slap it onto the windshield of any car sporting an Obama bumper sticker. “Hey Voter!” it said. “I’ll pay for your contraceptives if you pay for my ammo.”)

A mortgage and real estate broker named Marshawn Hogans was selling anti-Obama T-shirts. He told me that the president and congressional Democrats posed a double threat to Christian businessmen like himself: First, they cut into his income with the passage of the Dodd-Frank Wall Street Reform and Consumer Protection Act, which gave federal bank regulatory agencies more regulatory authority over financial institutions. Then they sanctioned “perversion” with their support for gay marriage.

People arrived in groups, tickets in hand, backpacks open for inspection. They carried posters decrying “Obamacare.” Some wore colonial garb. (One carried a musket.) The approaching rains weren’t going to keep them away from last night’s Unity Rally, a showcase for Tea Party favorites like Michele Bachmann and Herman Cain, who were denied speaking slots at this week’s Republican National Convention.

Once Tropical Storm Isaac blows through Tampa, the week will belong to Mitt Romney. But the weekend definitely belonged to the Republican Party’s more spirited voices: the Tea Party, the evangelical right and libertarian supporters of Ron Paul. As the Romney camp tries to evoke a unified GOP during the convention, the party’s more ideological wings want to make sure their voices don’t get lost in the kumbaya.

“We are not an unwanted second-class political party,” said Bachmann, a Minnesota congresswoman who dropped out of the presidential race after finishing sixth in the Iowa caucuses. “We are the conscience of the United States Constitution. We don’t apologize for that.” She ticked off a list of complaints about President Obama, including a stimulus package that amounted to “one boondoggle project after another” and a health-care reform law that she called “failed socialized medicine.” Now that the U.S. Supreme Court has upheld the Affordable Care Act, she said, “there’s only one option left for America to remain free, and that’s at the ballot box this November. We’re not going to stand by and see socialism implemented in our country.”

Obamacare made for good applause lines over and over. But the real cheering and stomping came when the language grew more visceral. It’s hard to imagine President Obama as anything close to a socialist—this is the man who appointed Timothy Geitner as his treasury secretary—but that message was sounded over and over through the night. “Friends, we are not going to go quietly into that dark night of socialist tyranny,” declared Judson Phillips, the founder of Tea Party Nation. “We are not going to let the lamp of liberty be extinguished by those who believe in government of the elites, by the elites, and for the elites.” (Ironically, Phillips has spoken in favor of restricting voting rights to landowners.)

“We have one simple message for the Obama-Pelosi-Reid axis of fiscal evil: You shall take my freedom, you shall take my liberty when you pry it from”—and here the crowd joined in—“my cold, dead hands.”

If Obama’s alleged embrace of socialism weren’t enough, Phillips also questioned the president’s patriotism: “For the first time, we have a leader in America who is committed to diminishing the United States of America,” he said. “We’ve got a leader up there who thinks that America is not the greatest nation in the world.” The sanctuary erupted into boos.

In the world view of last night’s speakers, the United States is divided: those who want to keep their hard-earned money and those who believe in what President Obama has called “shared prosperity.”

“You drive to work in the dark,” said radio host Neal Boortz. “You work yourself to the bone. You drive home in the dark. You make good decisions. You work 80 hours a week. You become prosperous. Obama takes your money and gives it to somebody else who is more likely to vote for him than you are. And that is shared prosperity.”

Boos from the audience. “I won’t share my wealth!” a woman behind me shouted.

“The Democrats—the looters, the moochers, the parasites—they’re going for access to your pocket. You’re going to vote to put a zipper on your pocket, to the extent that you can… Our republic is on the edge, and we have a president who’s dedicated to what he calls a fundamental transformation and what I call destruction.”

The star of the night, hands down, was former presidential candidate Herman Cain, who warned of a deep recession, maybe even a depression, if Obama is reelected. “Stupid people are ruining America,” he said to a sustained applause. “I’ve had some people say, ‘Listen, don’t you think that’s being insensitive?’ If they’re stupid, they’re just stupid. That’s not being insensitive. Somebody needs to tell them. They need to know the facts.”