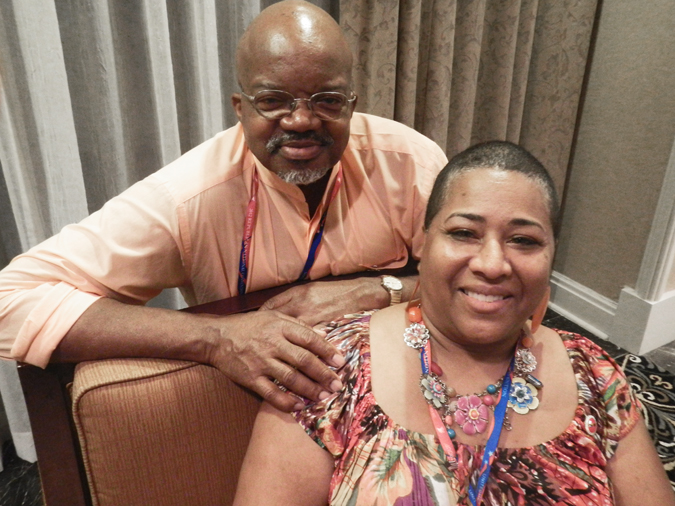 Miriam Aikens with her husband Norris: “Woman was built to carry children.” Photo by Barry Yeoman.

FORTY YEARS AGO, WHEN SHE WAS A TEENAGER, Miriam Aikens had an abortion. Then she had another. “I was young,” she says. “I was uninformed.”

She was raised a devout Christian, and still “in the church” when she terminated the two unwanted pregnancies. Describing the aftermath, she mostly avoids the first-person pronoun. But the pain in her voice, even as she talks to a new acquaintance, is palpable.

“Woman was built to carry children, and to bear children,” says Aikens, a 55-year-old minister from Reidsville, N.C., about 60 miles northwest of Durham.

We are sitting in the lobby of the Hilton St. Petersburg Bayfront, where the North Carolina delegation to the Republican National Convention is headquartered. A rowdy bar is behind us, but Aikens’ mind is decades away. “Once life is conceived, it’s a spiritual connection. And once that connection is disrupted, there’s an emptiness there. And that’s felt, whether it’s covered up by excuses or by someone else saying, ‘Well, it’s OK, it’s all right.’ That emptiness is there because there’s a part of you that just died. I would always cover it with other things—we won’t get into those things. But during that period of time, I could still hear God calling me.”

It would be another decade—she remembers the date: Dec. 27, 1982—before Aikens’ born-again experience. With that came a sense of redemption. “God has forgiven me,” she says. “But I know the haunting that can be there when a woman recognizes after the fact what she has done. And I know the pain that can be there—personally know the pain.” Abortion, she has come to believe, is no different from murder.

I had been interviewing North Carolina’s delegates all evening. Most of those pledged to Mitt Romney (as Aikens is) had listed economic issues—industry bailouts, health-care reform, the stimulus package—as their key concerns. But millions of citizens also share Aikens’ priorities, and not all of them vote. Some GOP leaders believe an ambitious registration and get-out-the-vote effort among religious conservatives could help swing this election in Romney’s favor.

At a rally Sunday afternoon sponsored by the Faith & Freedom Coalition, founder Ralph Reed ticked off a list of complaints against President Obama, from his support of gay marriage to the Affordable Care Act’s mandate that insurance companies cover no-cost contraception.

“How in the world did we get to this point?” he asked. “Speaking candidly, we can’t point our finger at anyone else, because the church had allowed this to happen. Did you know that, in 2008, there were 17 million evangelical Christians who didn’t even bother to go to the polls?” (Nine million of those, he said, were registered but stayed home.) “I vowed after the 2008 elections that, as long as I have breath in my body, that was never going to happen in America again.”

Later, Reed told me that evangelicals can’t shift the electoral map alone; rather, they need to be part of an electoral strategy that includes moving more Hispanic, female and independent voters into the Romney camp. He said North Carolina is one of eight states his organization is targeting in a massive campaign to register conservative Christians.

Aikens needs no moving. She and her husband Norris are the pastors at Living By the Word Ministries, a nondenominational evangelical church in Reidsville. They have nine children, 27 grandchildren, and five great-grandchildren. “We have a love for them all that is unspeakable and full of joy, “ she says. “I cannot imagine any one of those children not being born into this world.”

I ask Aikens what matters to her besides abortion. No. 1, she says, is same-sex marriage. “It is my heart,” she explains. “God knew what he was doing when he ordained marriage, and it is the foundation of our society. If those that choose the lifestyle of homosexuality, if they choose to unite, I don’t see that it can validly be called marriage. They can call it what they want to. I’m not restricting them.”

I wonder aloud if the word “marriage” is really the sticking point, as she seems to imply. “If there was a mechanism by which same-sex couples could get all the same rights as married couples, but not call it marriage, would you support that?” I ask.

“Although marriage may be a civil union, that civil union erupted from the spiritual union that is defined in the word of God. All the laws that we enjoy today, even the setup of our government, came from Judeo-Christian views that our founders established. And those views have lasted and they have endured, and they are the lifeblood of the prosperity of this nation.”

“Do you think that same-sex marriage would disrupt the prosperity of this nation?”

Aikens goes on to talk about how America’s leaders should look to the Bible to guide their policy in the Middle East. “The Word of God tells us that we should always bless Israel,” she says. “I believe that America has enjoyed the blessing of the Lord upon us because of our past relationship with Israel.”

“My [knowledge of] eschatology is not as good as it used to be,” I admit. (Eschatology is belief about the end times.) “But do I remember correctly that Israel looms large in the conditions that need to be set for the Second Coming?”

She smiles. “It does,” she says. “Eyes will always be set upon Israel for the Second Coming of Jesus. We should not be convincing Israel to divide the land that God has promised to them.”

Aikens won’t say who she supported originally for president. But she is fully on board with Romney today. She has no doubt that he and running mate Paul Ryan are Christians who share her social values. When I ask what might happen to the country if Obama wins reelection, she waves off the question. Romney and Ryan will win, she says, and “take this nation into a place of recovery, a place of prosperity. I’m not afraid at all.”