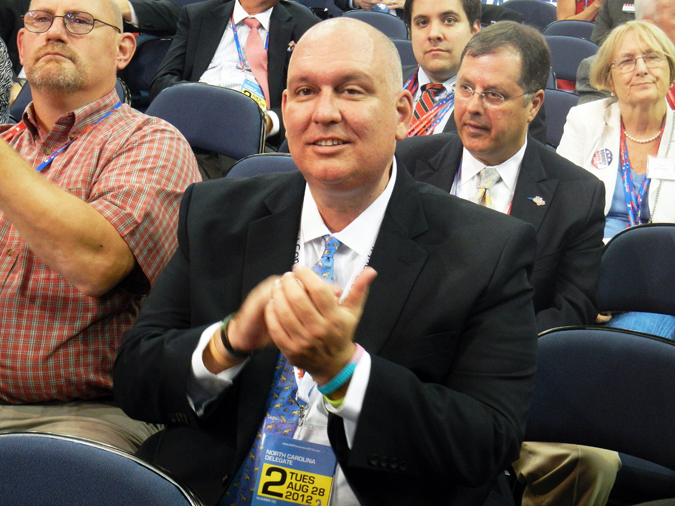 Delegate Richard Littiken: “If the government decides to take away your rights, you can decide to take them back.” Photo by Barry Yeoman.

I’VE COVERED NATIONAL POLICTICAL PARTY conventions since 1980. I know how amped-up the rhetoric can get on both sides. But I have never heard so much fear of an incumbent as I’ve witnessed during this week’s Republican National Convention.

She compared GOP activists to the United States’ Founding Fathers: “What they started, what they believed in, we must defend.”

At breakfast this morning, David Rouzer, a state senator and congressional candidate from Johnston County, warned the North Carolina delegation, “The United States is turning toward socialism. We’re not going to let that happen.”

Trying to understand the roots of that fear, I’ve been asking North Carolina Republicans how they imagine a second Obama term would play out. Nobody put it more starkly than Richard Littiken, a delegate from Sanford, 35 miles south of Chapel Hill, and the vice president of a family-run heating and air-conditioning company. I had been following the 43-year-old Littiken on Twitter (@Pyr8Pyr8), reading about his recent support for Pussy Riot, school vouchers and Todd Akin. (The latter is striking because Littiken is pro-choice. “But I definitely believe that the media people jumped on him in an effort to put forth their preferred candidate,” he said.)

So what does Littiken fear from four more years of an Obama presidency?

In short: He believes he will die prematurely if the president wins. And he fears he’ll be stripped of the weapons he might need to help wage an armed revolution.

Littiken has a type of cancer called medullary thyroid carcinoma. He describes it as “terminal.” Doctors have told him there are limited medical treatments. “So the idea of Obamacare, a fairly controlled medical bureaucracy, is absolutely frightening,” he told me.

It’s worth noting that the Affordable Care Act—which places tougher rules on insurance companies and provides for small-business tax credits, rebates for seniors to buy prescription drugs, and permission for states to expand Medicaid if they choose—does not create a government-run health-care system. (There’s also considerable academic contention about whether national systems fare worse than our own when it comes to cancer care.) But Littiken nonetheless worries about stories he has heard. “I met a lady in D.C. who had breast cancer,” he said. “She’s from Canada. She had to come to America to get treatment because she would have had to wait so long that she would have been dead by the time she received treatment in Canada.”

According to a 2011 study by the non-profit Canada Institute for Health Information, 98 percent of residents who need radiation for cancer receive it within a clinically appropriate time frame.

Still, this is not about statistics for Littiken; it’s about his greater sense—a sense that many Republicans have expressed—that Obama doesn’t care about his welfare. Sarah Palin’s “death panels,” a distortion of the president’s vision for more deliberative end-of-life care, nonetheless maintains a hold on many conservatives.

Littiken told me that Obama once told a voter that perhaps her 105-year-old mother should be euthanized with a pill rather than receiving a pacemaker. That comment, Littiken worries, portends what would happen to him. “He would kill me off,” the delegate says of Obama. “I wouldn’t be treated, so he’d basically kill me off sooner. That got me pretty fired up.”

The story, if true, would have been horrifying, so I decided to fact-check it. The woman is real; her name is Jane Sturm. During an ABC News broadcast, she asked Obama whether priority could be given to patients like her mother who displayed “a certain joy of living.”

“I don’t think we can make judgments based on people’s spirit,” the president responded. “That would be a pretty subjective decision.” He stressed that end-of-life decisions are difficult. “I don’t want bureaucracies making those decisions,” he said, and stressed that the current system sometimes does that by default. “We often make these decisions by just letting people run out of money or making the deductibles so high or the out-of-pocket expenses so onerous that they just can’t afford the care.”

Obama told Sturm that patients, families, and physicians need to make more informed choices: “At least we can let doctors know and your mom know that, you know what? Maybe this isn’t going to help. Maybe you’re better off not having the surgery, but taking the painkiller.”

Google “Obama” and “take a pill,” and you’ll find many conservative bloggers interpreting the president’s comment as Littiken did. When U.S. Rep. Dan Lungren, a California Republican, claimed on the House floor that the president would deny a pacemaker to a healthy 100-year-old, the Tampa Bay Times’ nonpartisan PolitiFact declared the statement false.

Just as important to Littiken is his belief that Obama “attacks the Second Amendment rights” of citizens. When I asked him how, he said, “I’m not specifically positive now,” but cited Attorney General Eric Holder’s statements of support for gun control. Littiken himself owns a Sig Sauer P220 pistol.

Again, I went to PolitiFact, the fact-checking site that in 2009 won a Pulitzer Prize for National Reporting. “Gun talk has been almost anathema at the White House,” it said. “Obama signed a bill in 2009 that allows people to carry loaded guns into most national parks; in 2011, he largely avoided a discussion—to the anger of many activists—about strengthening gun laws following the shooting of Arizona Rep. Gabrielle Giffords. Obama received a failing grade from the nation’s preeminent gun control group, the Brady Center to Prevent Gun Violence.”

I asked Littiken why gun ownership was important to him. “If free people don’t have the right to possess firearms, then their government can do to them whatever they wish,” he said.

“How does a free people possessing firearms help keep the government in check?” I asked.

“Well, if the government decides to take away your rights, you can decide to take them back.”

“What does that mean?”

“In practice, it would have to be a revolution,” he said. “I’m not saying we’re that close.”

“What would bring us closer?”

“Well, if Obama”—he caught himself here—“or any administration keeps encroaching our liberties, you have the choice to be a mouse and take it, or you can stand up for your rights.” He cited the 2005 case Kelo vs. New London, in which the U.S. Supreme Court ruled that a city can use eminent domain to buy up a neighborhood for private redevelopment. He also mentioned the bailout and bankruptcy plan for General Motors, which was brokered by the Obama administration.

Preparing for armed insurrection is a serious matter, so later I asked Littiken if I had understood him correctly. “If you look at some of the stuff that the Founding Fathers wrote,” he said, “they talk about [how] we need armed citizens to make sure that our government doesn’t get too far out of control. If you go to the DMV, that’s enough reason to not let the government have too much control.” Before anyone takes up arms, “things gotta get way worse than they are now. But when the government keeps taking your rights away, your civil liberties away, and then when the economy keeps deteriorating, when people can’t put food on their table for their families and the government’s coming in and taking their home from them because they’re having to foreclose on them, it’s just around the corner.”

The next day, I told Littiken about my follow-up research. When I reported Obama’s actual words to Jane Sturm, he responded, “I’m just telling you what my interpretation is.” As for PolitiFact’s report on Obama’s gun-control record: “Stuff hasn’t happened yet,” he conceded. “Yet what happens when it does?”