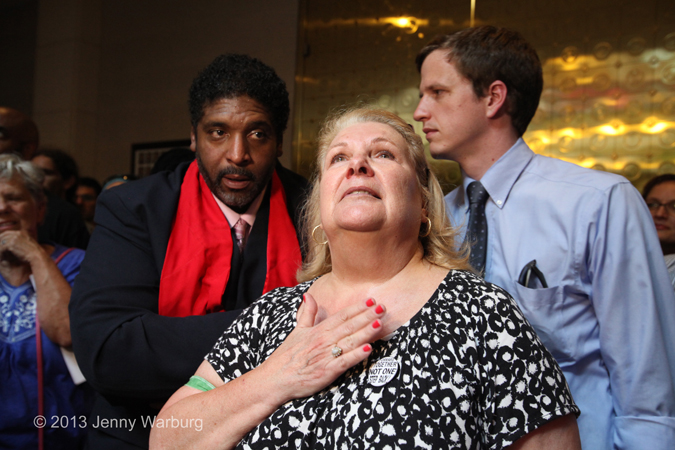 During 2014, I reported on North Carolina’s Moral Monday movement, a faith-based organizing effort that is becoming a national model. The movement is spearheaded by the state NAACP with broad support from churches and issue-based organizations, including women’s, immigrant, environmental, LGBT, and labor groups. Most of the articles were published online by The American Prospect, illustrated by photos by Jenny Warburg. They culminated in the top article, published in the magazine’s Winter 2015 issue.

Tragedy, Privation and Hope: Joy Boothe’s Inspiring Journey (October 2014)
Horrifically orphaned and raised with prejudice, she built a house and a new life with her own hands. Now hers are among many building a movement for justice.

Courtroom Drama: Voting Rights Paid for in Blood Under Siege in North Carolina (July 2014)
“It was, bar none, the worst legislative process I’ve ever been through,” Rep. Rick Glazier told the U.S. District Court.

Meet the Doctor Who Went to Jail to Save Lives (May 2014)
There is right, and there is wrong. And having to watch patients die because legislators refused the administration’s Medicaid expansion—that’s just wrong, says physician Charlie van der Horst. An audio slideshow.

Moral Monday Movement Gears Up for Round Two (May 2014)
As the North Carolina state legislature reopens on May 14 with no ideological reversal in sight, the Monday takeovers of the rotunda will resume. So, likely, will the arrests.

A Mighty Shout in North Carolina (February 2014)
The Moral Monday movement entered its second year with a bang on Saturday. But can it channel that upbeat energy to reverse a conservative tide?

In the Durham Bubble, N.C. Progressives Caught Off-Guard By Hagan’s Defeat (November 2014)
Tar Heel progressives may not have loved their senator, but they worked hard to re-elect her—and thought they would.